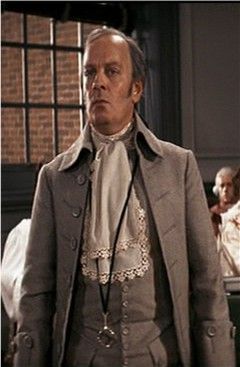 Being laughed at for something we take seriously is a more or less universal fear, but it is especially potent in storytelling because often the integrity of an entire scene or even of the entire work can hinge on a moment not being interrupted by unwanted laughter. If you are a playwright, however, you do have one final recourse – not an ideal one, by any stretch – in the form of the players in whose mouths your words have been placed.

Author and playwright Jean Kerr once said, “It‘s very embarrassing to say to an actor, please try not to get that laugh.“ This reminded me of one of the best examples I have ever seen of needing to overcome the comedy in the material, and it happens to come from one of my nostalgic favorites: the musical 1776.

Because it does dramatize a historical conflict – the debate over declaring American Independence – of which we already know the outcome, Peter Stone‘s book has to draw the audience into that world so entirely that the part of our brains that knows of course the damned thing‘s going to get signed is either pushed away or ignored. For the most part, it does that splendidly. There is one moment of dramatic climax, however, that lives or dies on how well it is played. Or, in short, how well it manages not to get that laugh.

All the other delegates have cast their votes in favor of independence. All of the backroom deals, persuasive rhetoric, and agonizing compromises have finally paid off. The last undecided state is Pennsylvania, and the tie-breaker delegate within that three-person delegation is…James Wilson.

The moment that they, as characters, and we, as an audience, realize that James Wilson is going to decide the entire question of independence is a crucial one. This is a man whose defining character trait up to this point has been that he has no opinions of his own. The rising dramatic tension of the scene requires that the audience take this seriously, but in some of the embarrassingly large number of productions I have seen, this moment gets the biggest laugh of the night and just flattens the dramatic progression. What went wrong?

All of the other votes were previously more or less decided behind the scenes before that final vote is held. The scene flies through those votes, which makes this part of the scene its dramatic heart. You cannot afford a big laugh here. But I have seen this moment played for laughs in the past, sometimes accidentally by directors who weren‘t careful enough, sometimes deliberately by directors who didn‘t know any better.

The irony of the situation can never be entirely eliminated of course. It is integral to the situation. But it need not necessarily be a laugh-out-loud sort of irony. With careful direction and performance, it can instead be a dry, detached irony. Maybe it can even achieve a bit of Brechtian alienation and make us think – in line with the themes of the work as a whole – about just how arbitrary some decisive historical turning points can be. James Wilson is the horse-shoe nail for want of which the battle might be lost. But the audience must think about this, not laugh about it. And that responsibility, for better or worse, falls on the people putting on the production.

This serves as a reminder of a number of things, but mostly of the extent to which playwrighting cannot be seen as an isolated art. 1776 has a fantastic book, but there is a moment within it that dies on its arse if the director and actors bringing it to life are not, in their own way, equally fantastic at what they do. Sometimes, not getting that laugh is the greatest service you can render to your material.