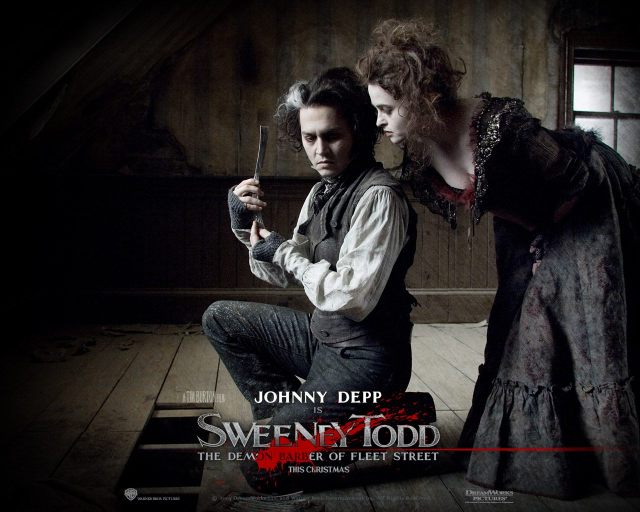 I have been given to understand that I am somewhat outspoken in my love for the 2007 Tim Burton adaptation of Sweeney Todd. Whatever your complaints (and I‘ve heard them before, I guarantee it), I would like us to set them aside for a moment and consider the movie as an adaptation alone.

Consider, for example, the controversial decision to entirely excise the chorus numbers. One might immediately presume this to be a measure taken against implausibility and staginess, but it actually serves a larger thematic purpose in the movie. The Tim Burton filmography is almost entirely about alienation, and Sweeney Todd is no exception. You can see this in the make-up work, where the gaunt and skull-like circles around the eyes are granted to those in Sweeney‘s sphere who have succumbed to madness. Toby, for instance, is not given the gaunt eyes until his very last scene – the one in which (SPOILER, I suppose) he cuts Sweeney‘s throat.

The decision to cut the chorus numbers extends this theme. The music and the related compulsion to sing is re-framed as a product – or perhaps an expression – of the madness inherent in the main characters. Where the Hal Prince interpretation emphasized the universality of inter-human predation and framed Sweeney‘s crimes as an extension of the callous disregard for life in an over-industrialized society, Burton pares back the story. He makes it less socially relevant, true, but at the same time more intimate and personally affecting.

For a film adaptation, this is – at least in my view – entirely the right choice. In a medium in which the camera can precisely focus on whatever specific element the director demands and capture micro-expressions that would be imperceptible on the stage, taking a sweeping story and making it tight and close is a choice that perfectly suits the medium into which the work is being transferred.

In short, Sweeney Todd serves as an excellent example of how to adapt a musical to film with a keen eye on the comparative advantages of each medium. By way of contrast, then, let us compare this approach to that used in the recent film adaptation of Into The Woods.

As I explained in my review at the time, I did not think the movie was particularly bad. The source material is just so good that you would really have to go far out of your way to make it unwatchable, after all. However, I also criticized the approach of the adaptation with a metaphor that I would like to elaborate on somewhat here.

The adaptation of Into The Woods is characterized not by any major additions, chronological fiddling, augmentations, or what have you, but instead by its omissions. Say a certain scene has to be cut for time. In that case, the subplot that the scene in question resolves must be cut in its entirety. If this cannot be done without destroying the main plot, then a more disposable subplot must be found. If you are going to cut the resolution of the Witch‘s arc, then you must also cut Rapunzel‘s death. If you are going to cut the Narrator and the Old Man for reasons of staginess, then you also have to cut “No More.“ You must cut precisely the right scenes in order to maintain the basic structural integrity of the piece as a whole.

In short, this adaptation treats the story like a Jenga tower. The trick is to pull out precisely the right blocks so that the whole edifice does not collapse.

Which, while I recognize that it‘s probably necessary in this case given just how complicated the plot of Into The Woods can get, I would assert is entirely the wrong way of going about it.

While I hope this does not require reiteration, I may as well repeat it here: the cinema and the stage are separate mediums with separate demands, and a good adaptation of one to the other requires heavy alteration of the source. If that alteration “ruins“ the story, then maybe that work should not have been adapted in the first place, which is also a possibility that I think the entertainment industry doesn‘t consider nearly enough.

But in any case, whatever your reservations might be about Helena Bonham-Carter‘s singing, Sweeney Todd stands alongside the likes of Fosse‘s Cabaret as a shining example of how to do a stage-to-screen adaptation right by rebuilding rather than just reducing the source.