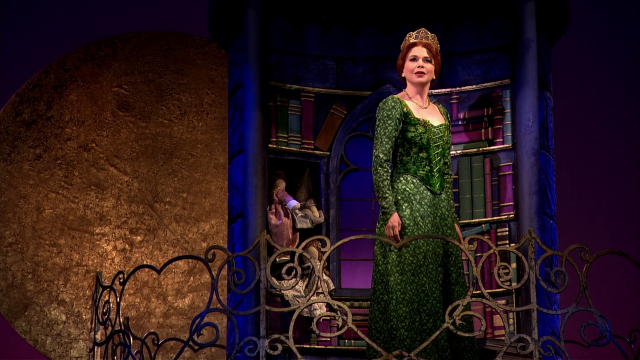 I’m going to do a bit of dramaturgy on a work you might never have given more than half a thought to: Shrek, The Musical.

There are plenty of complaints you might feel tempted to make about the show, many of them no doubt valid, but there is one element that I love, and confidently call an unqualified improvement on the original movie: the characterization of Princess Fiona.

The show took it upon itself to invent backstories for all of its mains (with the exception of Donkey, but the contrast between his inherently absurd nature as a talking animal and his refreshingly uncomplicated life was always a central part of the joke, so fair enough). The characterization for Shrek adds a little bit to the character, but mostly leaves intact the crucial dynamic between him and Donkey, where he starts out as the straight man to Donkey‘s over-gregarious affect, but ends up with Donkey being the voice of reason to his overbearing misanthropy. The backstory for Farquaad is arguably an improvement, giving him a fairy tale parentage that adds an element of self-loathing to his persecution of the fairy tale creatures in a distinctly (if uncertainly intentional) Hitler-esque fashion.

However, the character of Fiona gets the most fascinating revamp, and this is arrived at by trying to flesh out the actual mechanics of her situation in the first place.

Fiona is locked in a tower guarded by a dragon, waiting for a rescuer to come and free her. This much is established in the movie. The show, however, establishes that she was about seven years old when she was first sent off to live in the tower and left there in isolation for around twenty years. And while this is never taken in the Oldboy-style psychological direction that premise could imply, the unfairness of it all is not glossed over. In fact, the best song in the show is entirely about precisely that.

“I Know It‘s Today“ shows Fiona at three different ages, eventually all appearing onstage at the same time (very good use of the flexibility of theatre there, bravo), each singing about how they know that today is going to be the day they are finally freed from the tower. And yet there are subtle differences in the attitudes of the three.


The youngest version of Fiona very much buys into the supposed romance of it all. She is not stupid, however – her feelings of repulsion towards the bad parts of Rapunzel‘s experience imply that she only finds it romantic because she has been given the impression that she will not be made to suffer on account of the asinine tradition she has been forced to take part in.

“There’s a princess
In a tower.
Oh my gosh, that’s just like me!
Poor Rapunzel
Needs a haircut,
But the witch won’t set her free.
She passes time by singing
Like someone else I know
As years go by she sits and waits,
As years go by…Uh oh…
A torturous existence…
I don’t remember this part!
She wishes she were dead…
Skip ahead, skip ahead!
But in the end, Rapunzel finds a millionaire.
The prince is good at climbing and braiding golden hair!”

As a side note, the fact that she is sent away to fulfill her role at such a young age is a wonderfully pointed jab at how these stories often indoctrinate young women with a potentially toxic vision of femininity from far too early in childhood, but that is not presently the point.

As she ages, Fiona becomes more cynical. She has had to wait, but not for too long so far.

“There’s a princess
In a coma
Glad it‘s her instead of me.
Pretty maiden
In a glass box
How, I wonder, does she pee?”

The line, “Glad it’s her instead of me,“ is a blatant indication that Fiona does not yet realize that she, too, has been locked away in a box both literally and metaphorically, but again she is far from stupid. She questions the mechanics of the fairy tale she is reading, and specifically the part that ignores (as so many fairy tales do) that its female lead is a biological human being and not simply a will-less love doll. How is Snow White supposed to pee while catatonic? How is Fiona supposed to live in a tower on her own for years without losing her mind? The stories do not care, and neither did the society that created them.

“Now I know he’ll appear,
‘Cause there are rules and there are strictures
I believe the storybooks I read by candlelight
My white knight, my knight and his steed
Will look just like these pictures!
It won’t be long now, I guarantee!”

Each Fiona sings this verse in turn and then together, but it means something slightly different to each one.

Even after Shrek rescues her but before he unmasks, Fiona is obsessed with making the scene conform to the idea she was given of how this was supposed to work. She rationalizes his oddness as best she can, and in her song “This Is How A Dream Comes True“ she manages to briefly convince herself that everything she has been through has ultimately worked out for the best. As long as the rules and strictures hold, she can almost convince herself that what she suffered was worthwhile.

“This is how I pictured it,
More or less I must admit…
A thumping in my heart,
A life about to start…
I knew this day would come
And you would find your way.
At last my dreams come true.
I knew, I knew, I knew…
It would be today!”

It is only after she realizes that her rescuer was an ogre that her confidence in the system breaks down and she begins the back half of her character arc in which she gradually comes to love the aspects of herself that fall outside what society has told her is expected.

What we have, essentially, is the story of a woman who is literally put in a box and told that if only she waits for long enough, the system will eventually work for her. She waits twenty years for this to happen, and being rescued by an ogre is the system failing her that one last time that pushes her over the edge.

All of this, of course, is slightly undermined by the fact that the musical is still named Shrek and not Fiona, but I still love how far the idea was taken, to the point where I think that Fiona is the most genuinely compelling character in the show, and certainly the one whose arc I am most invested in by the end. Whatever else the show did right or wrong, this quietly subversive change both fascinates and pleases me.

One thought on “Fiona’s Tragedy in "Shrek: The Musical"”